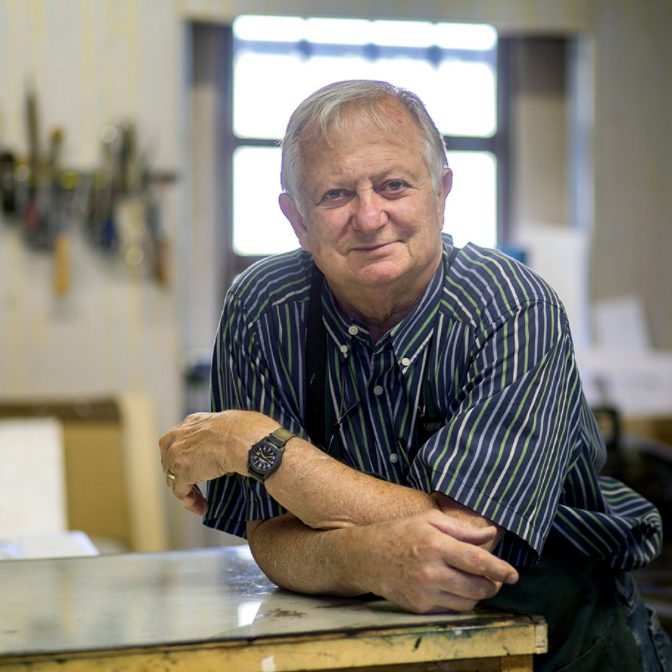 The founder of the Hoopsnake Press in 1970, Francis continues to produce paintings, prints and artist books at his studio in Lee County. His works will be featured on the MC campus in Clinton from January 9 through March 28.

MC Art Department leaders will host a two-hour reception for the Mississippi artist January 23 starting at 6 p.m. at the Gore Gallery. The show at the gallery is titled “Ke Francis – Hoopsnake Press and Associates.” The public is invited.

A narrative artist with a career spanning more than forty years, Francis has produced book works, paintings, prints, photographs and sculptures. His works have appeared in more than 30 major collections, including the New Orleans Museum of Art, the National Gallery, the National Museum of American Art and the Getty Museum. His pieces of art were displayed internationally as well in the Ginsburg Collection in Johannesburg, South Africa.

Born in Memphis, Ke Francis grew up in Tupelo. Early in the 1980s, the Northeast Mississippi resident began crafting a body of work based on interviews of tornado victims. As a result, Ke built a sculpture for the North Mississippi Medical Center. Tupelo’s first hospital, the medical facility was destroyed by a deadly tornado in 1936.

During his career, he’s done watercolors on farm scenes, color woodcuts, contemporary art with titles such as a “Raft in a Bottle,” and much more.

Ke and his wife, Mary, serve as co-owners of the Hoopsnake Press. Their daughter, Kerry Francis, helps administer the operations.

In 1996, the Hoopsnake Press moved to research space at the University of Central Florida in Orlando. Ke Francis taught for years in Florida, but moved back to Tupelo upon his retirement. The Mississippian returned to revamped press facilities in Tupelo in 2014.

Other major events at the gallery, says director Randy Jolly, will be selected work from the MC permanent collections from January 13-February 21. The 8th annual MC Art Department Competitive Show runs from February 27-March 27, among other key activities in the new year.

The Gore Gallery at 199 Monroe Street is located behind MC’s Leland Speed Library. Hours are Monday through Friday from 9 a.m. until 3 p.m. The gallery is open from 6-8 p.m. on Tuesday evenings. Admission is free.