By Turning Passion for Communication into Marketing Career, ‘Mister MC’ Has Powerful Story to Tell 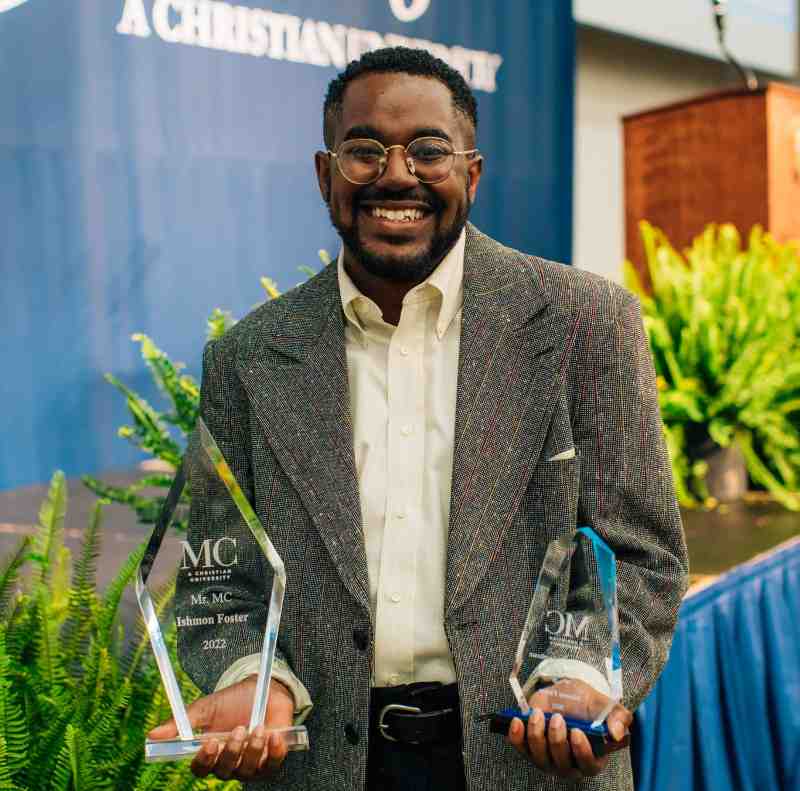 One of Mississippi College’s most popular members of the Class of 2022 is now in the business of telling a company’s stories with a style as unique as his given name.

Ishmon Foster is finding instant success as a marketing assistant with The Tell Agency, a full-service communications and creative organization in Jackson. The New Albany native fell in love with the art of communication early in his academic career. After earning his B.S. in communication with an interpersonal focus at MC last month, he is leveraging his passion into a promising profession.

“The way people communicate with each other has always fascinated me,” said Foster, whose first name rhymes with “Iceman.” “I’m a person who loves talking with people. I love communicating ideas and helping people understand things.”

One message Foster enjoys delivering as clearly as possible: he wouldn’t be where he is today if it weren’t for Mississippi College.

Foster became aware of MC in eighth grade when he began attending the Super Summer discipleship and evangelism leadership conferences hosted on the Clinton campus by the Mississippi Baptist Convention. During his senior year of high school, Foster took second place in an SBC speakers’ tournament at MC.

When he started looking at Baptist colleges in Mississippi, there was one clear choice.

“I came to MC, and I loved it,” he said. “I wanted to get involved right away. I dabbled in just about everything.”

He joined the Shawreth Men’s Service and Fraternal Organization and coordinated its standout routines for MC’s annual Swerve Dance Competition as an avid dance fan. He was a male honorary member of the Kissimmee Social Tribe. He was a vocalist for Worship Collective, the Department of Music’s famed Christian performance ensemble, and became Chapel Band leader. And he was a part of MC’s Welcome Week crew.

As a senior, he became Shawreth’s historian and social media coordinator. All the while, as a covenant member of Grace City Church in Jackson, he served as a Worship Leadership Team member. All of these activities had a central theme: service to the Lord through communication.

“Everything that I was involved in, for me to enjoy any activity, involved communication and bringing people together to connect in different ways,” Foster said. “It’s a passion of mine, something I always want to do in any profession I might have.”

During his early days at MC, the subject of his potential profession remained a bit murky. He initially considered a career in education, but a required course in interprofessional communication provided a new career outlook.

“I didn’t even know interpersonal communication was a field of study,” he said. “I absolutely loved it. I transferred to it as soon as possible.”

To gain professional experience, Foster joined the Office of Career Services at MC and became a peer mentor, sharpening his classmates’ communication skills by editing their resumes and helping them search for jobs. Later, as social media coordinator for Career Services, he engaged followers by creating compelling graphics and developing captivating content.

Taylor Ormon, director of Career Services, said she could almost immediately recognize that communication was one of Foster’s strongest attributes.

“Ishmon was a strong leader within our office,” Ormon said. “I thoroughly enjoyed watching him grow throughout his time here. This past year, he stepped up to guide and educate freshmen students to understand their role as peer mentors in our office.

“Ishmon spent time fostering relationships with the younger workers through his ability to communicate and make them feel welcomed.”

She said Foster’s innate ability to connect with others is derived from his engaging personality.

“Ishmon has the capacity to make anyone feel like the most important person in the room,” Ormon said. “He celebrates his peers’ successes, but then meets them right where they are in the lowest of lows. He can bring a smile to your face when you are having the worst day, and never, ever fails to bring comic relief when it is needed most.

“He was so popular with his peers because he is real, raw, and authentic 100 percent of the time. And he has one of the biggest hearts. Who wouldn’t want a friend like that?”

Foster was so unassuming about his popularity at MC that he was caught off guard when his classmates named him “Mister MC.”

“It was very kind of the students to think highly enough of me to vote for me,” he said. “Just to get nominated for the award was enough. It was humbling and a really big honor to receive it.”

When it came to finding a professional home, Foster’s personality and accomplishments offered many possibilities. The most attractive came from a company led by someone who was exceedingly familiar with the journey Foster found himself taking.

Amanda Wells earned her degree in public relations with a journalism minor at MC in 2006. A writer for several lifestyle publications, she focused on stories involving travel, cuisine, and interiors. During her journalism career, Wells developed connections with small businesses, corporations, and non-profit organizations in the Jackson metropolitan area, eventually forming The Tell Agency to showcase their good works.

Upon the recommendation of Hannah Wallace, MC’s social media coordinator, Foster contacted The Tell Agency about a potential opportunity with the company. His interview came to resemble a visit with old friends.

“We already had a connection through Hannah, so I was comfortable from the start,” Foster said. “We talked about different professors we had both had in the past. I got to meet the creative team, and I got to see that, not only are they amplifying the stories that are around them, but they are working hard to refine them.

“It was literally everything I was looking for in a job: an opportunity to work with people I love and build up and encourage others.”

Foster was selected to join Emily Fleming, a full-time graphic designer known for her drawings of students and faculty masked during the COVID-19 pandemic, as Mississippi College alumni on The Tell Agency’s talented staff. Wells said he was an exceptional choice to help promote the agency on social channels and in new business endeavors.

“We are a business focused on people and their stories,” she said. “It was clear from the moment I met Ishmon that he not only loves people, but is curious about their stories and what makes them tick, which is the core of what we do here.”

Foster wasted no time starting his new career. He received his diploma from MC on Friday, May 6, moved into his house later that day, and reported for work the following Monday.

“I was very excited to get started,” he said. “It has been absolutely like a dream. The people here have made it so easy for me to transition into this new professional career.”

That motivation has caught his new boss’s attention.

“Above all, Ishmon is highly motivated to do his job and do it well,” Wells said. “With a small staff and a lot of work, new employees are often thrown into the deep end, and he has shown quickly that he can swim. He asks for clarification and always asks how he can be helping. We are an ‘all-hands-on-deck’ staff, so that attitude will take him far.

“He is just a ray of sunshine. The positive vibes he has already brought to our office are so refreshing.”

“Ishmon has many qualities that make him an asset to our team,” Smith said. “He is a fast learner, always positive, and is consistently looking for ways to jump in and help. Our industry is fast-paced, sp being a go-getter is a must.

“He has fit in with our culture incredibly well. We’re a small team, so having someone immediately click with our culture is amazing. We could not be happier to have him as part of our team, and we cannot wait to see how he grows in this role.”

Foster’s optimistic attitude is essential for a fast-growing organization like The Tell Agency.

“It’s beautiful to see how quickly it’s growing, how my bosses’ minds are set on the future and moving forward,” he said. “I would love to play a part in helping build up this agency, and perhaps start an internship program here. It would be great to help provide an opportunity for people to come to a place where they can work, learn, and jump-start their careers.

“I want to be involved in some type of communication job for the rest of my life, because I love seeing people grow in their desire to communicate with others.”

No matter where his career may take him, Foster intends to stay connected to his alma mater. He already has plans to return to campus for next year’s Swerve competition.

“I wouldn’t be here without this college,” he said. “I’d never dream of not being a part of that place in some way and loving on that place like it loved on me.”

His old boss is one of many who are eager to stay in touch with the talented communicator.

“Ishmon would be an awesome role model for current undergraduate students,” Ormon said. “I’m very excited that he will still be in the area and able to invest in current MC students. I know he has plans to do that, and I cannot wait to see him every now and again on campus.

“Ishmon came to MC and truly made his experience his own. He jumped in feet first and never stopped giving to this University. I have seen him learn some hard lessons and make difficult decisions, but through it all, he has stayed true to himself, followed his heart, and ultimately chosen a career where he feels like he will be able to further the Kingdom. What more could you ask? I am so proud of him.”