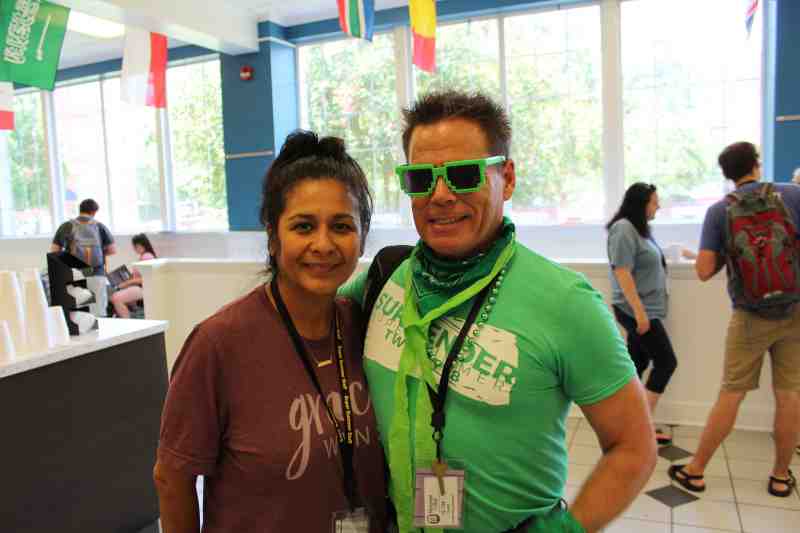 The award-winning newsman loves serving as an adult leader at the Christian camps attracting more than 1,300 teens from Baptist churches statewide. The young people enhance their walk with God, and build leadership skills on the Clinton campus each July.

After another year covering fatal car wrecks in North Mississippi, weather disasters, and crime for WCBI-TV, Allie is elated to tell the good news about Super Summer to his media audience.

“It is a blessing and privilege to not only help at Super Summer, but also tell our viewers how hundreds of students from Northeast Mississippi want to live out loud for Jesus in their communities,” Martin says. “They learn practical ways to do that at Super Summer.”

In fact, Allie’s been a fixture at the camps in Clinton for the past dozen years. He keeps returning to Mississippi College with an amazing amount of energy to serve scores of young people. This time, he visited the Baptist-affiliated university with his wife, Robin. “She keeps an eye on me, making sure I am organized. She helps me find stuff like my phone and notebook.”

Wearing green sun shades, and dressed in green, Allie worked as an adult leader for the Green School at the five-day camps sponsored by the Mississippi Baptist Convention. Super Summer camps originated at Mississippi College in 1987 with 300 teens signed up the first year, and continue to grow.

Allie served on a panel discussion group at MC’s Alumni Gym as hundreds of Green School teens looked on 24 hours before camp wrapped up July 20. Back home, the station’s Tupelo Bureau chief followed up with a TV feature focused on Super Summer’s benefits to Mississippi’s future leaders. Lively worship services, fun games, Bible study and fellowship time are all packed in.

It’s a story the 53-year-old Texas native enjoys trumpeting. “There seems to be more and more bad news in local markets, including Columbus-Tupelo. We have to cover the crime stories and those that could be depressing,” he says. “However, there are many positive, faith-based stories in our viewing area.”

The WCBI-TV job puts news reporter Allie Martin in touch with a diverse group of people, from Tupelo’s City Hall to the city’s Police Department to supporters of the Tupelo High Golden Wave. He recently did a story on a 8-year-old Pontotoc kid who’s a diehard Elvis fan and talented entertainer. But his feature at Mississippi College remains extra special.

For years, Allie served as an adult leader at Super Summer’s Purple School. But he switched to the Green School to meet an urgent need in July 2018. “Green School was a blast!,” he says. “Most of the students are heading into their senior year in high school, and they are seeking a deeper walk with the Lord,” Allie added. “I look forward to hearing how they will impact their campuses, communities and churches for Christ in the next year.”

A proud son of the Lone Star State, Martin hails from Lufkin, Texas, grew up in the Houston area. Moving to Northeast Mississippi in 1994, the native Texan has logged more than a quarter-century in the broadcasting field. The former University of Texas Arlington student began his TV career in college at a station in Dallas/Fort Worth.

Away from daily TV station duties in North Mississippi, Allie cherishes time spent with his wife, Robin, their three daughters and often volunteers at church. Asked about a return to MC next July, he didn’t hesitate. “Lord willing, I will be at Super Summer 2019!.”