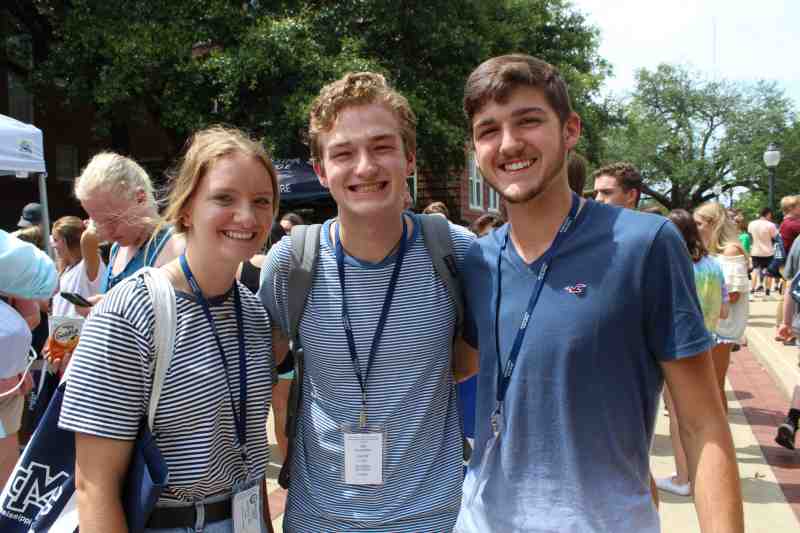 Maddie Varnum of Destin, Florida desired to attend a Christian university, and knew a couple of people at Mississippi College.

Soon after arriving on the Clinton campus, Maddie knew she fit in as an MC Choctaw. “This is the college I want to go to.”

In late May, the Floridian is among 200 incoming freshmen learning about MC culture, academic programs, and student organizations at 2019’s first summer orientation. The two-day marathon of meetings, time to fellowship, have fun and register for classes will end Friday May 31.

Cole Benoit, 18, chose to become an MC freshman because of the Blue & Gold’s solid track and cross country teams. At MC, the Pearl River Central High graduate is only two and one-half hours from his home in Carriere in South Mississippi. That’s another plus.

The drive home takes six hours along I-20 for freshmen Jake Farris of Dallas. The MC newcomer from Texas stayed busy making new friends at orientation.

About 400 parents and other family members signed up for the blitz of activities. Visitors learned about financial aid, scholarships, and church ministries. They also toured the 320-acre campus. Others stopped at the college bookstore, and sampled the diverse businesses in Clinton’s Olde Towne.

It’s a busy couple of days for MC administrator Jonathan Ambrose, other staffers and his group of student orientation leaders.

Whether they distributed bottles of water, directed campus traffic or joined freshmen for lunch in the cafeteria, everybody had assignments.

There’s little time to rest for Ambrose and his team. The newly appointed associate vice president for the student experience and dean of students, Ambrose and his crew soon lead a 2nd summer orientation. That’s set for June 10-11. The final freshman orientation will be July 11-12.

Elisha Rogers of Laurel and Morgan Newman of Brookhaven are drawn to the medical field and mentioned MC’s innovative cadaver labs as the best place to pursue their education.

Freshman Nicholas Leach, 17, heard about Mississippi College by attending summer camp at Lake Forest Ranch in Macon, Mississippi. The Covington, Louisiana resident is impressed with the atmosphere at America’s second oldest Baptist college. “I like the community and being able to grow in Christ.”