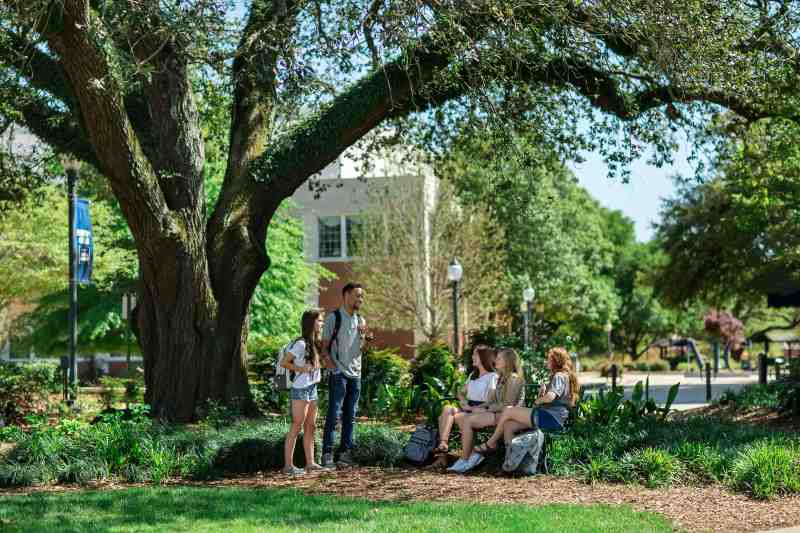 Mississippi College continues to rate among the finest institutions of higher learning in the country, according to one of the nation’s foremost consumer reporting companies.

U.S. News and World Report has included MC on its list of Best National Universities for 2022-23. The Christian University is ranked as one of the best private institutions of higher learning in the state.

U.S. News released its authoritative list of best universities on Sept. 12. It’s the third time within a month that MC has made a national list of top universities.

On Aug. 17, the Princeton Review, a best-in-class tutoring, test preparation, and admissions organization, designated MC as one of its “Best Southeastern Colleges.” Earlier in September, Niche, a leading international data and review company, ranked MC No. 10 on its “Best Christian Colleges in America” list for 2023.

Coulter Clement, a junior marketing major from Water Valley, said it’s easy to see why Mississippi College has consistently appeared on national best college lists for more than a decade.

“This U.S. News ranking says so much about the excellence and quality of Mississippi College,” Clement said. “MC offers not only an excellent academic standard, but a fun, Christian-based college experience. College is a time in your life when there is a lot of growth. MC provides an environment where you can grow personally and have an abundance of Christian influences and opportunities to help guide you in that season of life.

“As a small school, this ranking speaks volumes about how great MC is. It reminds me that I made the right choice during my college search. I am proud to be a Choctaw, and this ranking verifies why.”

According to Blake Thompson, MC president, the national acclaim Mississippi College receives from being included on best college lists supports the institution’s vision of being known as a university recognized for academic excellence and commitment to the cause of Christ.

“This recognition reflects the remarkable work of our faculty and staff, the incredible effort of our students, and the indispensable support of our alumni and community friends,” Thompson said. “They are the foundation of what makes Mississippi College special as we endeavor to provide lifelong learning in a Christian environment.

“As the U.S. News listing suggests, this is a place where students rise.”

Clement said what he loves the most about Mississippi College are the people who make it up.

“I am beyond thankful for the people who I have met through my time at MC,” he said. “I have met some of the most loving, influential, and fun people, from professors who have become my friends, classmates who share my interests, and best friends who pour so much into my life.

“They will forever have an impact on me.”

In addition to appearing on the U.S. News Best Colleges list, Mississippi College was included on a ranking of the nation’s leading universities in a new category: Top Performers on Social Mobility.

The listing measures the extent schools enrolled and graduated students who received federal Pell Grants. Those typically come from households whose family incomes are less than $50,000 annually, although most Pell Grant money goes to students with a total family income below $20,000. MC was ranked sixth in the state in this category.

Three of MC’s educational programs were individually cited by U.S. News as being among the nation’s best.

MC’s Department of Engineering, Computer Science, and Physics was the only program in the state to be included in U.S. News’ ranking of Best Undergraduate Engineering Programs (No Doctorate) for 2022-23. It was the third consecutive year MC’s engineering program made the list.

For the third straight year, MC’s School of Business was included among U.S. News’ Best Undergraduate Business Programs listing. The school ranked sixth in the state among all business programs and was second-highest among private universities in Mississippi.

MC’s School of Nursing made the U.S. News Best Undergraduate Nursing Programs rankings for the second time. The category debuted last year. MC tied Delta State University for the fifth spot in the rankings among schools of nursing in Mississippi.

According to U.S. News, its listings reach more than 40 million people each month who are seeking expert advice on a variety of categories. The “Best” series of consumer guides on colleges is one of its signature franchises.