Warm Welcome for Class of 2022 at Mississippi College 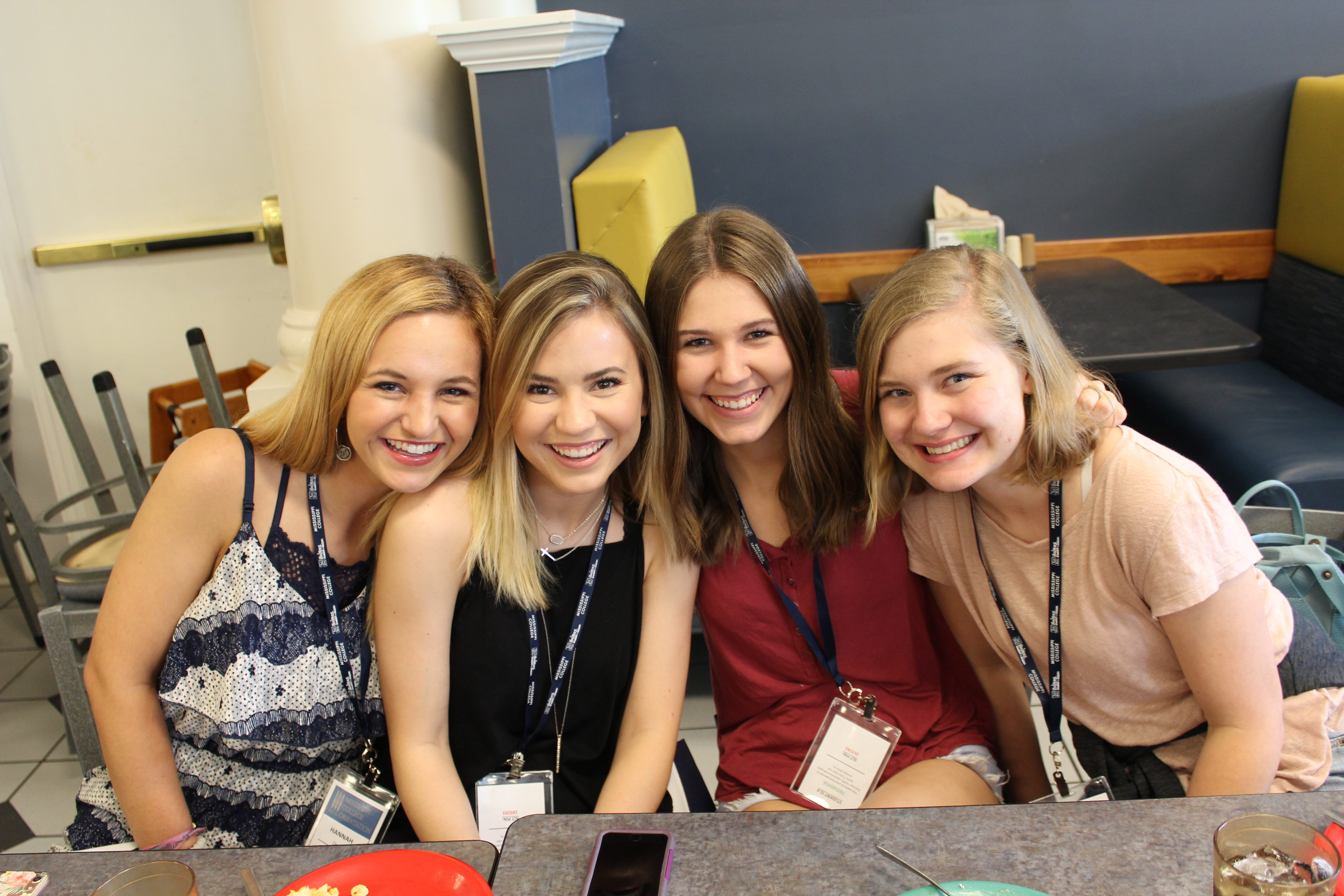 Pictured at the university cafeteria on May 31 are members of the Class of 2022 at Mississippi College. They are: freshmen Hannah Drew of Crystal Springs, Caroline Simpson of Clinton, Hallie Sessums of Terry and Sophie Tusant of Memphis, Tennessee. Caroline's parents, Mark and Robin Simpson, are MC graduates.

Mississippi College freshman Caroline Simpson will enjoy the perks of learning at MC classrooms and running home to do her laundry.

But it’s more about the close-knit atmosphere convincing the Clinton High graduate to become an MC Choctaw. An 18-year-old Clinton resident, Caroline’s parents, Mark and Robin Simpson, graduated from the Christian university. So did her grandparents. Mississippi College remains embedded in her DNA in the institution’s hometown.

Whether their connections to the 5,200-student university began decades ago or they’re new to the Blue & Gold family, 200 incoming freshmen received a warm welcome at orientation. Activities began Thursday May 31, including a dinner with President-elect Blake Thompson serving as the featured speaker.

Students traveled to the Clinton campus from across the South, and as far away as Michigan, with parents along for the ride. They learned about college academic programs, student organizations, ministry opportunities, and financial aid, while making new friends. Activities end on Friday.

Elizabeth Fleming, 17, of Olive Branch chose to study accounting at MC to join her twin sister, Emily, who will both enroll for classes starting in late August. As Lewisburg High students, Elizabeth tagged along with Emily during a visit to the school in metro Jackson. “I fell in love with MC,” Elizabeth said during lunch in the university cafeteria with the Class of 2022.

The incoming freshmen selected the 192-year-old university for a variety of reasons.

The 2018 season opener at Robinson-Hale Stadium is in late August. A high school cornerback, he received other college offers, but felt the Gulf South Conference team led by Coach John Bland was the right fit. Kobe is interested in the university’s physics and electrical engineering programs.

“Mississippi College has a good nursing program and I like the Christian environment,” said freshman Kenzy Stewart. The 18-year-old nursing major is a 2018 Brookhaven Academy graduate.

Admissions staffers and orientation leaders welcomed the newcomers the minute they arrived on the Clinton campus.

Danielle Brown, 18, of Dallas became an MC freshman after receiving encouragement from her pastor’s son who enrolled here a year ago. “It felt the most homey,” says the Texan who will become a business major. She’s interested in MC’s new entrepreneurship program in Self Hall.

“I love the small college atmosphere,” said Hannah Drew, 18, of Crystal Springs. The elementary education major is a 2018 Copiah Academy graduate. “Everyone is like family.”

The Class of 2022 will start classes early during the Blake Thompson administration. A Rienzi, Mississippi native, Dr. Thompson will succeed retiring President Lee Royce on July 1. After 16 years of superb service, Royce and his wife, Rhoda, will retire to Northern Virginia to live near their son, Mark Royce, a college instructor.

One of Blake and Jana Thompson’s three children helped greet visitors in the lobby at Nelson Hall on Thursday morning. Sarah Blake Thompson, 11, did a terrific job during her debut at freshman orientation, admissions staffers say.

At a program greeting newcomers, MC senior Emily Hankins of Oxford noted she experienced freshman orientation in their seats at Swor Auditorium three years ago. “God got me here,” the public relations major told the audience. Mississippi College, she said, will prepare students for a career, create lasting friendships and build their faith. “It will get you ready for life.”