Wi-Fi 6 is a more clever way to say 802.11ax, the newest available Wi-Fi standard. Somebody at the Wi-Fi Alliance (a real thing - I’m not joking), decided that 802.11a/b/g/n/ac/ax was too confusing and after the 6th “generation” of Wi-Fi, they decided to give it a number.

I said they were clever but, after all, it did take them six generations. It only took PlayStation two. Or, even Xbox three... sixty. Nevermind.

Do not be confused with 3g, 4g, 5g, etc. That is not Wi-Fi. It’s wireless, technically, but when we talk wireless, we’re not talking about cell towers. Pfft.

802.11ax, or Wi-Fi 6, the exact same thing, is the first major upgrade in wireless technology since 802.11n (retroactively named Wi-Fi 4). If you think back, you may remember when wireless went from being just... not-so-great to, “Hey, this is pretty good.” That was Wi-Fi 4. Over the next couple years, from 2010 to 2011 and into 2012, the market decided wireless was no longer good, but necessary, and began a surge in growth that hasn’t stopped to this day. 802.11ax is meant to deliver on that demand.

When I said Wi-Fi 6 is the first major upgrade since Wi-Fi 4, it’s not to say Wi-Fi 5 (802.11ac) was bad. It just wasn’t everything some had hoped for. It had some good ideas, but in the end, was only marginally successful to its goals. Now, that’s not to say it was worse than 4. It wasn’t. It just wasn’t the jump we had with 4.

But, Wi-Fi 6 may be, and I think it is, the next jump we’ve been waiting for.

Can I get a better Wi-Fi connection for my console?

Maybe. Use this one simple trick. (Doctors hate it.)

Often consoles come with not-so-premium wireless capabilities. However, most consoles, even old ones, do come with gigabit ethernet ports.

What’s a gigabit ethernet port? A gig port is capable of doing close to 1000 megabits per second. Your typical console is lucky to connect, over the wireless, at around 54Mbps. That’s before we factor in 802.11 overhead and interference.

So, instead of using your Xbox 360’s wireless, grab an ethernet patch cable and plug it into the RJ45 data port in your dorm. Don’t have one in your dorm?

Plug it into your laptop.

On a Windows machine, open up a command prompt: type cmd in the search box and hit enter. When the black screen comes up, type netsh sh wlan wirelesscap. This will show you the wireless capabilities of your laptop. Scroll down until you see your Rx and Tx spatial streams. Higher is better. You want at least 2; hopefully you have 3. Your console probably has 1.

Next, type netsh sh wlan int. This will show you the wireless interfaces on your laptop. Look down where it says “Channel.” If your laptop is on channel 1, 6, or 11, or anything between, you’re connecting via 2.4GHz. If it’s on channel 36 to 165, you’re on 5GHz.

If your laptop can handle 2-3 streams on 5GHz, you’ll almost certainly have a better Wi-Fi experience bridging its wireless connection for your Netflix (gaming) console.

Please refer to the highly technical drawing below:

In other words, on a Windows machine, click start and type ncpa.cpl and hit enter. Find the two network connections you want to bridge. These should be your active Ethernet (the cable plugged into your console and laptop) and Wi-Fi (the wireless from your laptop to the AP in your dorm). Select them both at the same time and right-click. Click “Bridge Connections.”

That’s it. You are now a network engineer.

What happens when a different network is on the same channel?

What if, e.g., there’s an mc.edu being broadcast on channel 6 and your iPhone hotspot is also on channel 6?

Assuming both networks are sufficiently heard from surrounding devices, all devices, no matter which SSID they’re connected to, will have to share the same channel 6 “lane” we talked about in a previous post. Anything connected to your hotspot will have to wait for devices connected to mc.edu. Similarly, people using the mc.edu wireless will have to stop and wait for your device while it’s doing its data burst.

Even if your laptop is connected to your phone, which is connected to 5G on a cell tower, you’ll still be sharing airtime with other laptops connected to MC’s infrastructure Wi-Fi broadcasting mc.edu. Kind of like parasailing - even though you’re flying in the air, there better be room for your boat on the water or you’re going to crash all the same.

Like we talked about before, the 2.4GHz spectrum has, essentially, 3 usable non-overlapping channels. The 5GHz has up to 23 (in America). This is why the 5GHz band is “faster.”

Ever notice a web page take an extra bit of time to load than it usually does and wonder what’s happening? It could be the server was experiencing an increased number of requests at the time. It could be your browser’s cache was failing. It could be your computer was struggling to keep up with the 18 different programs it was juggling in RAM. Or, it could be packet loss due to a high retry rate in the wireless medium. Having to “retry” means having to send that web request all over again from the beginning after timing out. That’s a lot of overhead; and can take a lot of time.

When you set up an ad hoc printer or a cell phone hotspot, the best we can hope for is greatly reducing the amount of airtime everyone around you can use, and at worst you’re increasing the retry rate in your cell (the range of your signal) and even beyond, effectively jamming the signal.

If printers broadcast an SSID (wireless network name) for devices to connect to and this can interfere with MC’s wireless network… how is that any different from my phone’s hotspot?

What happens if my device hears another 802.11 device on the channel?

The answer to that question is why a device first listens for other devices when it wants to use the Wi-Fi. Only one device can use the wireless at a time due to its inherent half-duplex nature.

Half-duplex is just a fancy way of saying “one at a time.” Why one at a time? Because that is all there’s room for. Like a narrow 100ft hallway where two people meet in the middle and one has to turn around. Or, when your kid tries to climb up the slide but there’s already a kid coming down. Or, the Chrestman stairs when you’re carrying a load of laundry. Once there’s an additional user on the same medium, neither will likely accomplish their end goal.

A walkie talkie is also half-duplex. You push the button and talk on a specific channel, but if you don’t let that button go, the guy on the other side is never going to talk back. He won’t have a “lane” to do so.

We’ll pick up next time with what happens when there is another network on the same channel. Though, if you’ve been paying attention, you already know the answer!

Out of the box? Absolutely.

When you go to the store and buy your brand new personal printer, it more than likely ships with wireless capability. It also promises super easy setup and connectivity to your laptop or whatever you’re trying to print from. To do this, it broadcasts an SSID - the actual name of the wireless network, for your device to connect to. Once connected, you can install the printer and use it easy peasy. Perfect. Except…

The network it creates and then broadcasts is ad hoc.

At home this is fine because there aren’t 200 other people living with you, all with their own wireless devices attempting to connect to 40 different Wi-Fi access points. On campus, however, the printer is using up one of the precious few Wi-Fi channels your other devices utilize to talk on the network. This can cause high latency (ping times), frame loss (rubberbanding in games), and slower download speed.

How To Configure Your Printer:

Go into the settings of your printer, whether from the software on your laptop or the LCD interface on the printer itself, and tell the printer to connect to mc.edu. It’s not necessary, but if you can find it, register your printer’s MAC address here: https://www.mc.edu/computerservices/mymc/device-registration. This will help it work better.

Make sure you can no longer see your printer broadcasting any Wi-Fi. Printer’s broadcast names are usually something like “DIRECT-B7-HP ENVY 420.”

The key difference between printing one way versus the other is after connecting your printer to mc.edu, it will play nicely with all the other clients in the dorm and on campus. Leaving it “out of the box” is a bull in a china shop.

When buying a laptop, make sure it has at least 3 spatial streams.

What in the world is a spatial stream? First, you’re looking for this abbreviation in the hardware specifications of the wireless network card: 3x3:3

The first 3 designates how many transmit (Tx) radio chains your laptop has. The second 3 is for how many receive (Rx) radio chains. The third 3 is the most magical, because if you have it, the previous two are implied. It stands for your number of spatial streams. And, with this mighty ability, your laptop is able to transmit and receive multiple data streams at once(!)

That’s like, to use our previous example, driving 3 cars wide in the same lane! Don’t try this with your buddies in Jackson.

For example, if you connected to one of the wireless access points on campus with your single stream phone at 65mb, you’d be able to connect to the same access point with your 3x3:3 laptop at 195mb*!

*For reference, Netflix claims to only need 5mb for HD quality video streaming.

You might be wondering, “Why is 5ghz faster than 2.4ghz?” Great question! It’s not. In theory. 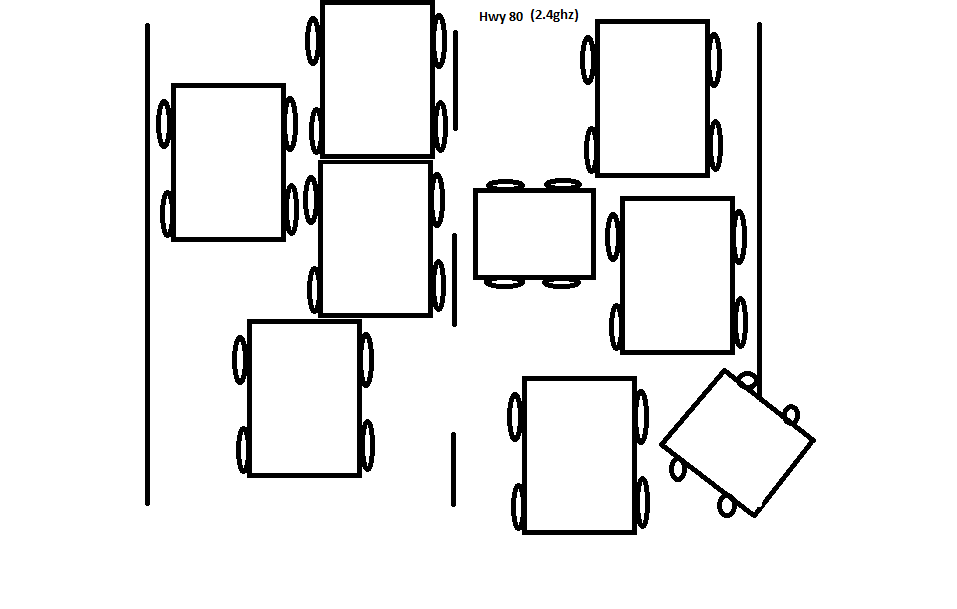 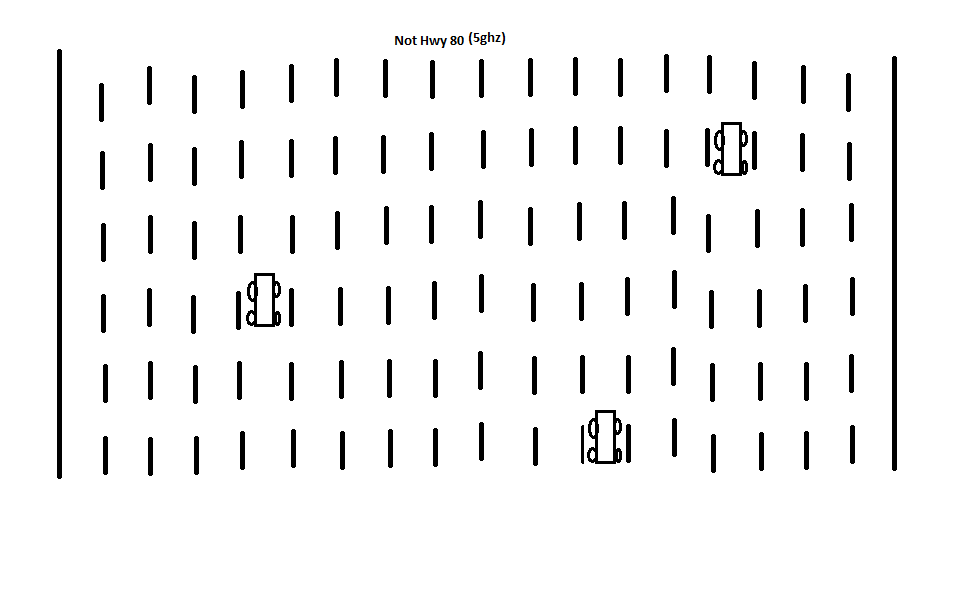 So, while 2.4 is just as fast as 5, it's got a lot fewer lanes, the lanes are crowded, and when you're trying to do something in a hurry, there are people in the way.

How do I know if I’m on the 2.4ghz spectrum or the 5ghz? You guys and your questions - so good, so good.

Sometimes, your device will let you choose. If it will, choose 5ghz! I suppose there may be some remote possibility that the 2.4 spectrum would present better results than 5.0, but don’t worry, you’ll probably never run into it on campus, so just set it on 5 and forget it.

If it won’t let you choose, your device likely doesn’t support 5ghz, which is a real shame, because that’s kind of like buying a pair of running shoes without laces. Please don’t tell me you prefer the hurdles in penny loafers.

In short, don’t buy a laptop or phone that doesn’t support 5ghz. And, if it does, make sure you’re using it!