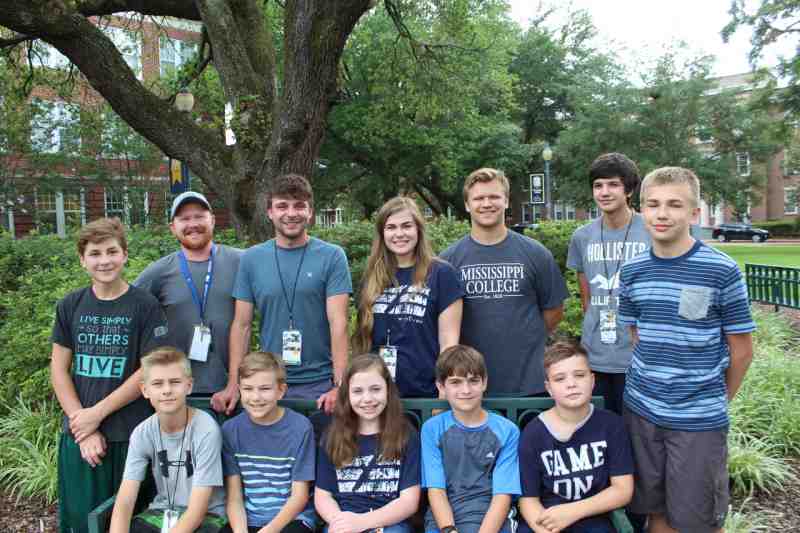 Visitors from First Ukrainian Baptist Church in Minneapolis are pictured in late June 2018 at Mississippi College. The Minnesotans are here for Fuge and MFuge camps.

The Land of 10,000 Lakes, Minnesota is loaded with attractions. Shoppers love trips to the huge Mall of America. Minnehaha Park with 53-foot waterfalls, baseball games with the Minnesota Twins, and the state capital of Saint Paul also rank high on the to-do list.

Rather than staying cooler at home, kids from a Minneapolis church boarded vans and traveled more than 1,000 miles to summer camp at Mississippi College.

For the second straight year, visitors from First Ukrainian Evangelical Baptist Church spent 16 hours on the road to enjoy a week at Fuge camps. Many of the campers are sons and daughters of families relocating to the United States from Russia.

Leaders of the Minnesota delegation visiting the Clinton campus include names like Aleksey Shapoval and Veronica Melnichuk. They lack Southern accents. So do the campers. While temperatures remained steamy in the Magnolia State, the Minnesotans relish their visit in MC Choctaws Country. Pastor Igor Melnichuk leads the church.

Eight boys, one girl and three leaders made the journey from the state border Canada to Central Mississippi. Campers attended lively worship services, read the Bible, played games and served on missions around metro Jackson.

“We returned back to MC because we loved the campus and were familiar with things from last year,” Veronica Melnichuk said. “What’s different now is we had a blessing to bring more students, most for their first time.”

The Minneapolis church emphasizes missions. Back home, they organize Gospel lunches. Members bring sack lunches to homeless people and tell them about Jesus. The church supports Feed My Starving Children, a nonprofit distributing food to the poor in developing nations.

With its mix of church missions in Mississippi’s capital city and quiet time to get closer to God, MC summer camps are perfect.

“This is my first year at camp, and I can’t wait to come back,” says 11-year-old Kseniya Medvedoski.

Like campers from states like Mississippi, Missouri, Louisiana, and Alabama, the Minnesota bunch dined in the school cafeteria.

“The sweet tea was too sweet,” said Vitaliy Perepelitsa, one of the group’s adult leaders.

But, overall, their entire visit was pretty sweet.

“The best part of the camp has been the worship and site (ministry) projects,” said Veronica Melnichuk, a Minnesota college student. “We really liked MC’s campus and the history behind it, and how beautiful it blooms in the summer.”

The MC camps also received a thumbs up from young people with All Nations Church in Huntsville, Alabama. “Our church just loves pouring out and sharing the Good News to kids,” says Lincoln Phongsavan, one of the group’s leaders. “Sometimes we have to preach the Gospel with action.”