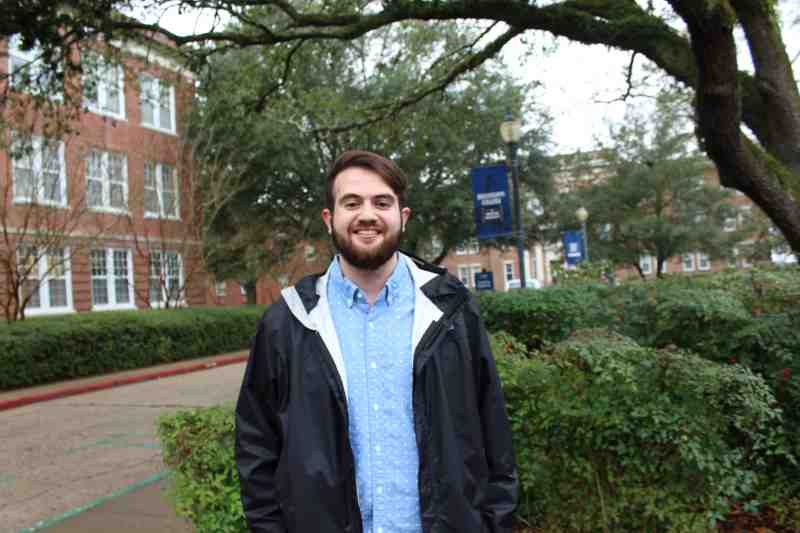 Mississippi College sophomore Chris Williams, 20, of Madison was among MC student leaders sharing their testimonies with the Education Commission on January 11.Active with the Baptist Student Union, Chris seeks to become an occupational therapist and join medical missions around the globe. MC SGA President Anthony Jackson of Mound Bayou also addressed the group of Baptist educators and pastors on the Clinton campus. MC President Blake Thompson is a member of the commission.

Chris Williams chose Mississippi College after realizing it was the best place to prepare for the life the Lord desires for him.

Since becoming a student, the 20-year-old Madison resident is thankful the Christian university opened doors for him to advance spiritually. The Clinton campus is also the place where professors help give him the skills to pursue a career as an occupational therapist.

At the January 11 meeting, Chris spoke of the opportunity the MC Baptist Student Union offered to lead him to the mission fields in the Philippines. The Southeast Asian country in the Western Pacific consists of more than 7,000 islands. Manila is the capital city of the nation with more than 105 million people.

Thousands of miles from Clinton, Chris and two other American students worked with International Mission Board missionaries last summer to start Bible studies in a tiny village. “We saw the Lord do many incredible things throughout the summer.”

On his final day there, the MC sophomore will never forget seeing a huge crowd of Filipino believers “loudly and passionately singing praises to our God in their own native language.”

The riveting Sunday morning worship service at a Philippines hotel proved to be “such a beautiful and overwhelming sight to see because I realized I was looking at a physical picture of what heaven is going to look like one day.”

In Revelation 7:9-10, the Bible speaks to how people from every tongue, tribe and nation all stand at the throne of Jesus worshipping and giving praise to God, he noted.

His studies rank high on his priority list. The Madison Central High graduate is a psychology major with a minor in Christian Studies. The Mississippian plans to attend occupational therapy school after earning his Mississippi College diploma. He envisions taking his career to serve in medical missions around the globe to share the Gospel.

The son of Marty and Lynnette Williams, Chris has Mississippi College Blue & Gold in the family DNA. His sister, Kimberly Williams, is a 2016 MC graduate. His cousin, Scarlett Hodges is a member of the Lady Choctaws soccer team.

In the middle of his one-year stint as MC’s SGA president, Anthony Jackson made history with his election last spring. The former Choctaws football player became the first African American to serve as SGA president on the Clinton campus.

A political science major, Jackson has taken school spirit to new heights. During the Fall, Anthony was out on the track at Robinson-Hale Stadium with the MC cheerleaders getting football crowds pumped up during Homecoming. Anthony finds time to stop by the A.E. Wood Coliseum to fire up the student section at Choctaws hoops contests. SGA duties take much of his time, too.

Soon after his election, Anthony Jackson was elated to make his mark in Mississippi College history. “It’s a great milestone for me.”

Jackson started school at Mississippi College in 2015. Like many MC seniors, Anthony looks forward to graduation day later this year. Law School is one future option for the personable MC Choctaw. But really, the sky’s the limit.

His hometown in the Delta is well-known to historians. With a 98.6 percent African American population, Mound Bayou is home to 1,446 residents today. Founded by former slaves in 1887 in the wilderness of Northwest Mississippi, Mound Bayou in Bolivar County is the oldest all-black municipality in the United States. It was incorporated in 1898. Anthony Jackson is proud of Mound Bayou and Mississippi College with its emphasis on seeing students build their faith.